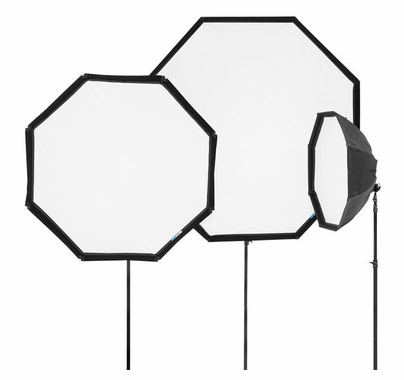 Posted at 14:23h in Equipment by pr0light

It’s like getting two Lightbanks in one! High heat versions available.

OctaPlus Lightbanks have soft silver interiors which create a highly efficient and even light spread with rounded highlights. They are compatible with all strobes and continuous sources up to 1200 watts and high heat versions up to 4000 watts.

Choose either a 3-foot, 5-foot or the OctaPlus 57 to produce superior lighting and expand your lighting arsenal. OctaPlus Lightbanks require an OctaPlus “OP” Speed Ring.

The Chimera Octa 2 #6010 and Octa 30 Beauty Dishes #6015 create stunning soft light – the kind of gorgeous light you want for those commercial beauty headshots and portraits. The Centre Bounce Disc reflects the “raw” light from your light source into a soft white reflector. As a result, you can light people perfectly and achieve that round catchlight in their eyes.

The Octa 2 and Octa 30 Beauty Dishes convert to Octa Plus Banks when used with the included front Diffusion screen. They work with Chimera Standard OctaPlus Speed Rings* for studio strobes and the new adjustable Versi Octa Speed Ring for On-Camera flash units.